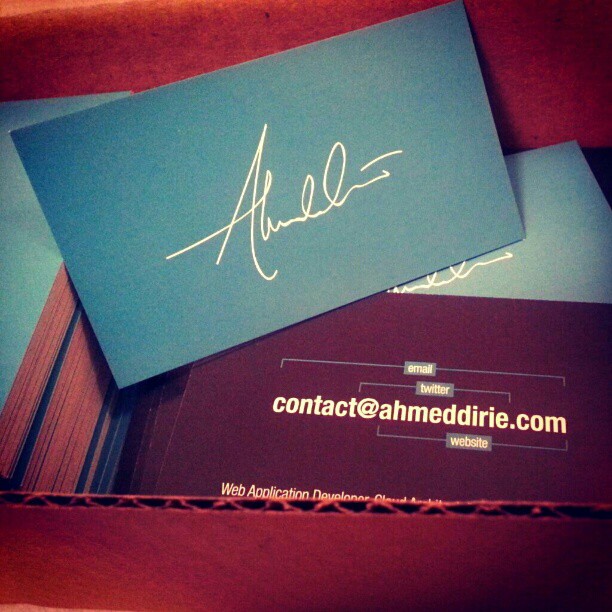 I recently began designing a personal business card with KISS (Keep It Simple, Stupid!) in mind, and its been a few years since I’ve had one. My last business had a pretty awesome cartoon of me on it along with the relevant info. Seeing as I’m somewhat older now, I didn’t think slapping a cartoon of me on it would fly, although I still love the thought of it.

This time around, I didn’t want to include much detail aside from an email address, name, twitter for contact and possibly what I do. With our social connections and the way things have progressed, I don’t think people ever just pick up the phone to call without a prior heads up of some sort. That of course, ruled out the addition of a phone number and I’m not one for phone number loyalty.

I came across a blog post from Boris Smus, talking about minimalist business card design and I fell in love with the concept. I ‘ve bounced a few ideas off another designer, @AmaLayla and shortly after put in an order for a box of cards.

The whole process took 3 hours from start to finish and cost a whopping $22.39 for 500 double sided cards. You gotta love ePrintFast. I received the cards last night and the response online was overwhelming. Much thanks to all the folks who commented on Facebook, Instagram and Twitter.