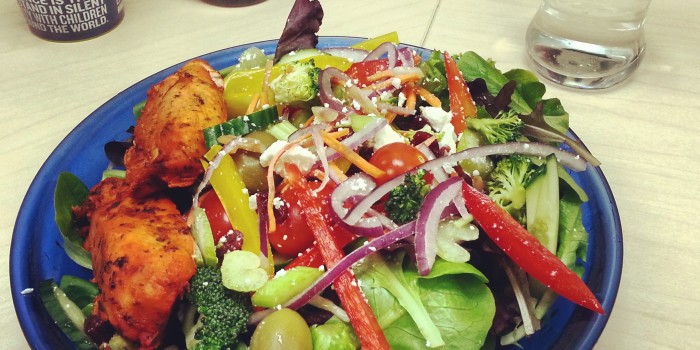 It’s been a while since I’ve written something here. Although, much has been in the air. I recently discovered, or to be exact, realized a few random things about myself. I’ve come to accept that I’m probably the worst street crosser in London, UK. I seem to always be looking in the wrong direction.

The only time I ever use milk is in my coffee. If there is some Lactaid kicking around, I might be easily convinced to down a cup. And I’m an active animalitarian when I’m driving… I save squirrels by stepping off the gas pedal when I see them. Now that realization lead me to do a Google search for humanitarian (why, I don’t know), which is to be concerned with or seek to promote human welfare. For a moment there, I thought that the word might have something to do with animals as well. This is my third week straight of eating the same salad and tandoori chicken. It all started three weeks ago. I was headed to the gym and decided to call the butcher near my home and ask for 10 chicken breasts and for him to pre-marinate it in tandoori. In his mind, he thought I wanted the breasts of ten entire chickens, while I just wanted 10 pieces to use in my meals that week. After a bit of back and forth and some confusion, I just said give me 5 kg. In my defence, I was driving and didn’t mentally calculate 5kg.

I walked in the store after my workout and found four trays of marinated chicken breasts. In short, I was staring at 20 chickens and their breasts.

Seeing as I haven’t updated the cycling to 2000km page, this would be a good time to give you an update. Actually, any excuse would be marvellous at this point, but I’m a straight shooter. I never hit 2000km in the summer. Too many things were in the air – fasting, weddings and the usual summer activities.

A couple weeks ago, one of my buddies commented on my gym routine and said, “Man, you’re going hard!”. I responded back with, “Bro, I’m on my grizzle!”, which left him stumped. In essence, I was referring to being on my grind and constantly going in and making sure I’ve exhausted every ounce of energy I had for the day.

I reset my clocks on August 31 and began grinding it out in the gym. This entire process required changing some of the habits I had built such as constantly eating out to preparing my meals for the week on Sunday. I spend an arm and a leg on glass containers (why are they so damn expensive). On the plus side, I casually run 7 miles (11.3km) now a few days a week and I’m down 22lbs.

With every software release at Klocwork, the company gives employees gifts (yay!). We choose from a list of things and this time around, Fitbit was on the menu and of couse I jumped on it. Right after receiving my Fitbit Flex, I picked up the Fitbit Aria and have been tracking my progress over the past few weeks. I never liked counting calories, but I keep track of the foods I eat – and with the massive database of foods, I guess I’ve been indirectly counting calories along with my weight and activity. It’s impressive and I highly recommend it.

Elliott Hulse, one of the guys I follow on Twitter and Youtube, put me on to the idea of growing stronger physically and mentally at the same time. He talks a lot about listening to audio books with Audible while performing any workout routine or simply walking. After a couple weeks of just listening to music, I got tired of listening to the same playlist and switched to watching TV. This only worked when I was running on the treadmill or elliptical.

After downloading Audible, I automatically began catching up on my books, starting with the physical ones I owned that I’ve never read, but proudly left in my bookcase to collect dust. Currently, I’m listening to The Power of Habit.

To sum it all up, when it comes to the gym, the one thing I’ve learned is that you just have to do it. You have to do it whether you like it or not, feel like it or not… you get the picture. I’ve had a few days where I’ve been exhausted beyond words and spent more time yawning between sets. Although, you keep pushing. This video below from Elliott sums this up beautifully.