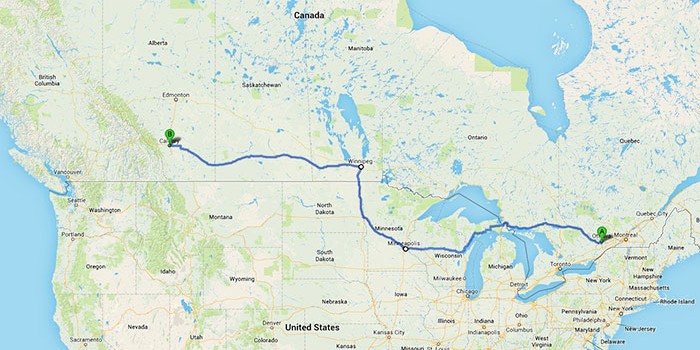 I recently got in my car and moved from a city in Canada, through the United States, to another city in Canada. Sounds odd, right? Well, life is odd, but the over all journey always eases the wrinkles out. After pretty much packing my car with as much of my stuff as possible, I started driving. I left Ottawa, Ontario and five thousand three hundred and sixty two (5362) km later, I arrived in Calgary, Alberta.

My first stop was supposed to be Sault Sainte Marie, ON (that’s in Canada), but thanks to Hotwire, my hotel booking happened to be in Sault Sainte Marie, MI (that’s in the United States), which explains why I couldn’t find the hotel on my GPS for the first couple minutes. After almost 11 hours of driving and getting through the not-so-busy border, I got to my room and kicked my feet up. At this point, my entire trip or driving changed from coasting through Canada to, well, I’m in the US, right?

In the morning, I had breakfast and coffee in this pretty cool spot. I decided to change routes and head further south to Minnesota. The owner told me about the crazy changes in speed limits in Wisconsin and to make sure I kept my eye on it. I drove on turtle shells. 12 hours of Audible books later, I got to Saint Paul and surprised family by just showing up at their door unannounced.

I spend the next 5 days between Saint Paul and Minneapolis and it was beyond awesome.

Continued down the road to Winnipeg, Manitoba and the first thing I was really excited about was actually putting my Canadian SIM card back in my phone. I think one of the main things you can appreciate about Canada is the wireless connectivity you have along the way. I spent the night in Winnipeg and practically did nothing but eat a proper dinner. Despite it being super freaking cold, I cruised through the city and headed out in the morning. Regina Saskatchewan was no different. Cold beyond words. With the 2013 Grey Cup going on, every hotel room was $280 a night. Outside of getting cute with picture to throw up on Instagram, I continued down to Medicine Hat, Alberta. On the way there, the most interesting thing was when I was chasing sunset. There was some time where ahead of me where the sky was pink, orange, purple and blue while behind me the sky was pitch black.

After spending the night in Medicine Hat, I coasted to Calgary and it’s been super amazing since. I’ve always hated downtowns because of parking and the over congestion. This time, I live in downtown and I don’t think I can live anywhere else.

Overall, I’m super thankful to my friends and family back in Ottawa. Funny enough, I would have never made this journey if it wasn’t for the push and I must admit, I think every Canadian should drive through the country at least once. You can view the rest of the pics from this trip on my Instagram account.